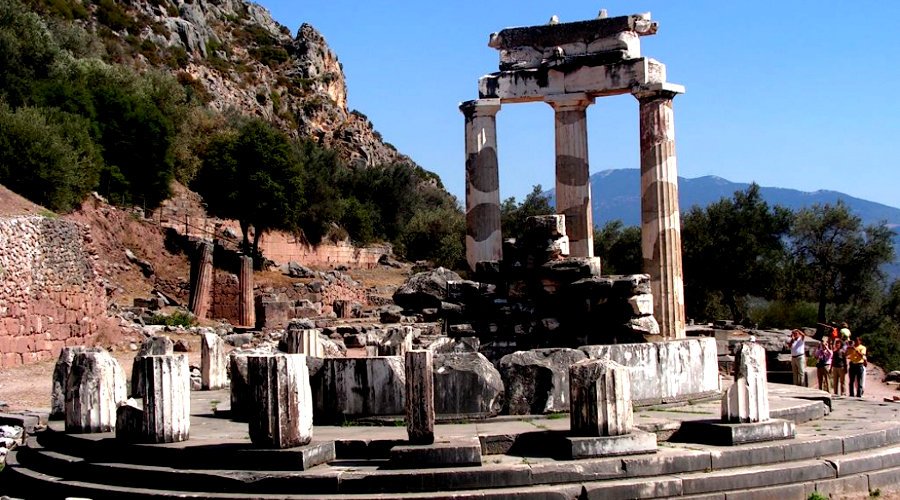 The layout of Delphi is a unique artistic achievement. Mount Parnassus is a masterpiece where a series of monuments were built whose modular elements - terraces, temples, treasuries, etc. - combine to form a strong expression of the physical and moral values of a site which may be described as magical. Situated in a magnificent natural setting which is still intact, it is an outstanding example of a great Pan-Hellenic sanctuary.

During the Mycenaean period, the female deity of Earth was worshipped in the small settlement of Delphi. The development of the sanctuary and oracle were to begin in the 8th century BC with the establishment of the cult of Apollo. Under the protection and administration of the Amphictyony, the sanctuary continued to be autonomous after the First Sacred War and, as a result, increased its Pan-Hellenic religious and political influence. The Pythian Games were reorganized, the sanctuary was enlarged, and it was enriched with fine buildings, statues, and other offerings. In the 3rd century BC it came under the domination of the Aetolians and later, in 191 BC, was conquered by the Romans. During the Roman period the site was plundered on occasions, but it was also favoured by some of the Emperors. With the spread of Christianity, the sanctuary lost its religious meaning and was closed down by Theodosius the Great.

Some of the most important monuments of the site: